I've gotten a lot done this weekend on getting workplace and utility data synchronized between the client and server on login.

The task was easier than I expected, but still a lot had to be done.

It won't seem like much in this screenshot, but believe me, it was quite a bit of work: 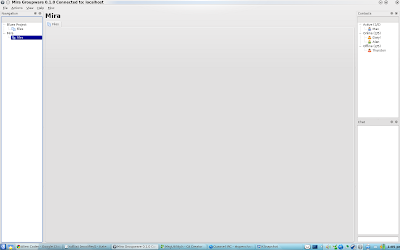 What happened before was that all those Utilities and Workplaces that were loaded on the GUI, were manually loaded.

What I've done this weekend is that I've added a few messages to our client<->server protocol to synchronize workplaces and utilities over the network when a client logs in. Also, they are actually utility plugins, and not just made up utilities.

Another thing here is that the Utility icon is actually part of the utility plugin binary, and Mira core gets it from the plugin at run-time.

Also, this weekend I finally got a new laptop and I have a dual-boot setup with Windows 7 on it.

So, my next task is to set up a dev environment around MS Visual C++ express 2008 and get Mira to compile on it. I tried once a long time ago, but gave up on it because a lot of code had to be re-written.

However, this code has already been removed, so I don't expect this to take too long this time around.

Also, all the work I've done on the plugin has been tested on linux, but not on windows, which prevents me from pushing these changes to trunk according to the rules we laid out a while ago in a meeting.

After I'm done getting Mira to work with Visual C++, I'll then work on a simple Files utility and get ready for our 0.1 release :).

I expect us to be able to release 0.1 before mid-January if we keep up this pace.
Posted by Alan Alvarez at 9:25 PM

It’s a 5 reel game with 20 paylines and a progressive jackpot. It additionally has one of the highest RTP values on our record at ninety seven.44%. Both the welcome provides and reload bonuses carry 35x 클레오카지노 rollover requirements, and you can use use|you need to use} the extra funds on any slot game you like.

You can even use the contact form on the location if you wish, but we advocate that you use the stay chat as you’ll get an answer much quicker. 1xbet Games such as Gladiator, Under the Bed, Rockstar, and The Slotfather are all beautifully introduced and have incredible storylines. Always check the wagering requirement – With the Big Spin Casino bonus, you'll need to wager the welcome bonus 30x.